Difference between revisions of "CREO" 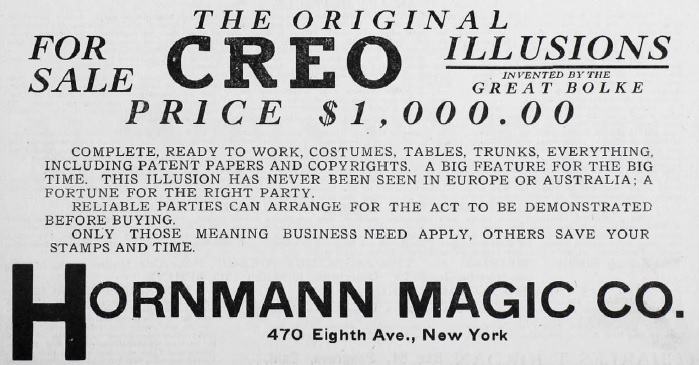 The illusion begins on stage with three rods, a female head of plaster, a wig, a long cloak and a tray of theatrical make-up. After they are placed together to form the shape of a woman (without any over), the lifeless eyes of the plaster head open, the face becomes animated and begins to smile. The cloak is removed and a living, breathing woman steps down.

Many imitated the effect using methods of their own creation including Thurston, Dante, Nicola, Maurice Rooklyn, Mark Wilson and Harry Blackstone, Jr. Thurston renamed his version "The Vampire," which was also the name of the marketed version by Thayer and Owen.[1]

Bart Whaley in Epoptica (1989) states that the illusion was invented by the Todd Brothers of Philadelphia and performed by them until the death of one broke up the act. Creo was then taken over by Bolke.