Difference between revisions of "Escape Master"

Escape Master was a quarterly periodical by Norman Bigelow from October 1985 until around 2001. The magazine included volume numbers, even though there was only one issue per volume.

Thomas Blacke took over the magazine with Volume 27 around 2001 and added an "s" on the end to rename it "Escape Masters" (which was also the name of the International Association for Escape Artists). He started publishing it quarterly. 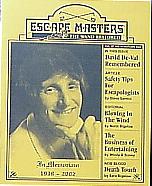