Born sometime between 1873 and 1875, Vandy was billed as "The World Famous Magical Juggler", "The Jocular Juggler", "The Juggler King", "The Great Vandy", "the Best Plate Juggler on Earth", the Greatest Juggling Novelty in the World", "the Peerless Vandy" and "England's Extraordinary Entertainer", he was primarily a juggler and equilibrist (a person who performs feats of balance, in this instance the balancing of objects on other objects seemingly defying gravity), but also gained notoriety as a magician as his career progressed. 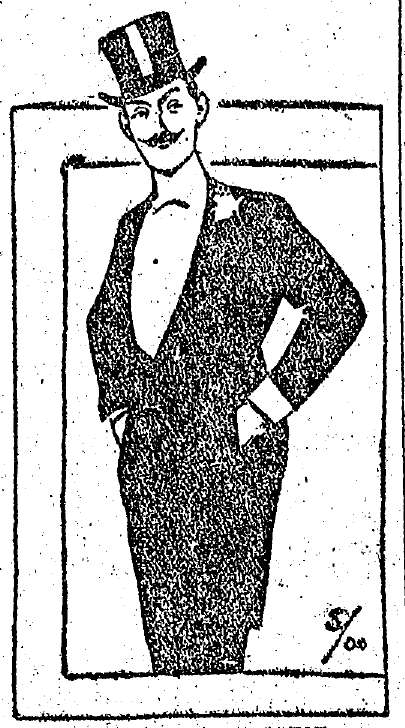 Over nearly 5 decades Paul Vandy's performances branched from the music hall circuits of the UK to the leading theatres of Europe, America and South Africa.

Vandy was one of the owners of the Accrington Hippodrome (prior to it burning down circa 1908) along with Fred Willmot, Frederick Edward Weisker, John Leopold Weisker, William Johnson, and Albert Lindsay Parkinson. He was the partner of Ernest Valentine D'Iffanger (professionally known as Ernest Valentine) in a Theatrical, Musical and Variety Agency, located at 11 Nassau Street, Shaftesbury Avenue, under the style of Valentine's Agency; a business that Vandy took sole ownership of in late 1902. Vandy was also the proprietor of the Magical Pastimes Co and Vandy's Magic Saloon (West Pier, Brighton).[1]

When he started out he was represented by Tom Coleno of Nottingham. His act was so successful that at the age of 18 in 1892 a challenge was issued in The Era which read: “PAUL VANDY - the Novel, Fantastic Young Juggler and Equilibrist, Challenges anyone of his Age (Eighteen) to do his tricks with Lamps, Blocks, Plates etc, for One Hundred Pounds. Paul Vandy was simply astounding, some of his feats surpassing far in neatness, dexterity, and boldness even those of much older hands in the renowned Tannaker troupe of Japan.”

The first reference to Paul Vandy's performance is found in The Era on 9th September 1892 and is described just two months later by the same publication as juggling with "incredible dexterity." By the end of 1893 he was billing in all Moss & Thornton music halls across the UK. At the age of just 19 the national newspapers were singing his praises. The Guardian described him as very clever as a juggler" who showed no little skills in his manipulations" and the Daily Mail described him as "a thorough master of his business". By the summer of 1893 he was being regularly billed as "The Great Vandy." Leoni Clarke was quoted as stating that Vandy's show was "Great" and "that if LC does not know, then who does?" By the summer of 1895 Vandy had become a top billing specialty act renowned throughout Great Britain and Ireland as "the Phenomenom." In August 1895 he was requested to bring his magical juggling act to South Africa and set sail on the S.S. Spartan immediately. The first tour of South Africa was a great success and lasted until December 1895.

By 1897 Vandy was heading playbills internationally as "The Greatest Juggling Novelty in the World" and in February 1897 he became the highest paid specialist act on record when he agreed to tour South Africa with Fillis' Grand Circus to great acclaim. He returned from South Africa to tour Ireland with repeated encore performances and rave reviews; one of which describing a performance at the Empire Palace Theatre in Dublin in December 1897 stated: “The juggling entertainment, for which Mr. Paul Vandy was responsible, however, was far and away the best and one of the cleverest things seen in Dublin for a long time. The skill and dexterity with which he directed the apparently motiveless gyrations of plates, sticks, balls and cups through the air, was marvellous, and the spectator was left firmly of belief that there is no angle or curve of a projectile which Mr. Vandy could either create or arrest.” Vandy is repeatedly referred to as the originator of many of the trickiest juggling feats seen in the UK at this time.

In October 1898 The Era reviewed a performance given at the Middlesex Music Hall as follows: “Mr Paul Vandy juggles with a nonchalant air, a big cigar, a stick and a top hat, by way of preliminary; trifles with a pot of tea, a cup and a saucer; and finally does wonders with billiard balls and waistcoat pockets; his neatness and dexterity calling forth an imperative encore.” At the end of 1898, as reported in The Era, Vandy was specially engaged for Keith’s Circuit in the U.S.A. by H.H. Felber, Esq. at yet again record salary for a British speciality act. Around 1898 Vandy is repeatedly referred to as the originator of the evening dress act which was gaining popularity. On 31st December 1898 Mr. L. Livermore described Vandy as absolutely the greatest juggling novelty ever seen.

1900s - Vandy starts to introduce magic into his act.

In 1900 Vandy toured the USA and France extensively; highlights of which were performances at the Union Square Theatre in New York and the Casino de Paris. His performance at the Tivoli Theatre in London on 24th November 1900 was reviewed in The Era as “A speciality that wins enthusiastic appreciation is the juggling of Vandy, whose sleight-of-hand in the watch trick is the smartest we have seen. There is a touch of humour in his manipulation of heavy spheroids, and his neat and unstudied methods make his entertainment particularly attractive.”

Reading the "English Notes" column within The Sphinx, you can track his progress as a magical performer. In August 1904 issue, we see that he was appearing at "the Grand" as "a very smart Juggler" and had started "introducing a little conjuring in his act." By April 1906 the Irish Independant was applauding Paul Vandy as "The World Renowned Juggler and Trickster" and by June 1906 the french national newspaper La Presse were heralding him as "The King of Jugglers."

By 1907, not only had Paul Vandy integrated magic and conjuring into his impressive juggling act, he had also begun to issue catalogues of magical novelties as part of his business the Magical Pastimes Co. at that point operating from Barnes, Surrey.

In May 1908, the Scotsman reviewed Vandy's show at the King's Theatre in Edinburgh - “Jugglery is seen at its best at the hands of Mr. Paul Vandy. All his feats are exceedingly good, but his manipulation of three billiard balls was perhaps the most attractive item last night” and later in August 1908 after a performance at the same theatre said that “Certainly Paul Vandy stands on the first rung as a juggler and a trickster.”

By October 1908, following a performance at the Chelsea Palace in London, Paul Vandy had raised the standard of the magical element of his act to such a level that he was no longer referred to as merely a trickster; the Stage newspaper heralding him as “Paul Vandy, magical juggler" who was described as performing "bewildering tricks with watches, plates and other articles in his own cool and resourceful manner.”

In April 1909, we find Vandy starring on the same bill as Annie Abbott at the Hippodrome Accrington and by May 1909, Vandy's act was declared "a clever sleight-of-hand and juggling show, fully merits the hearty applause bestowed upon him by the patrons of the Hippodrome, Huddersfield.".

On 19th February 1911 Ireland's Sunday Independant declared that the engagement of Paul Vandy at the Tivoli Theatre in Dublin "is one that will cause especial satisfaction, his exposition of the magical jugglery being exceptionally clever and skilful.” On 6th May 1911 Vandy advertised a pamphlet titled "Conjuring for the Coronation" in the Penny Illustrated Paper. Later in 1911 the Stage applauded Paul Vandy for "some clever and mystifying juggling and conjuring tricks” and described him as "the originator of magical juggling."

In 1913 the Scotsman applauded the “Extraordinary skill as a conjurer and a juggler of Paul Vandy, who produces plates, watches and handkerchiefs in a most mysterious manner. He concludes his “turn” by performing the feat of balancing a billiard ball on top of another.”

He published a house organ of general interest for his business called Conjuring in 1914 (at least one issue is known to exist.)

Vandy's novelty act at the The Tivoli, Manchester on July 7, 1913 was fully described in Magical World, New Series (July 1913) with particular attention given to the trick christened "Watch it" confirming that Paul Vandy was the tricks originator - "The watch mysteriously wanders invisibly to different parts of Ms costume until it finds its own invisible way back to its chain again." The Magical World's review ends with the observation that Paul Vandy's show was "An excellent act and brilliant showmanship." Later that year, at the Hippodromes of Brighton and Portsmouth The Stage stated that "Paul Vandy mystifies the audience with his magical juggling feats.” By December 1913, the Alhambra, London proudly billed Vandy as "The World's Greatest Magical Juggler."

The list of performances between 1900-1929 are too many to list in full here but a few reviews and engagements of note are worth referring to:

Following a performance at St. George's Hall, London on 11th August 1921 the Stage commended the Vandy's “Dexterous juggling, with a dash of skilful conjuring."

Paul Vandy regularly appeared at Maskelyne's Theatre of Mystery heralded in the Observer on 5th October 1922 as follows “The programme at Maskelyne’s Theatre will be strengthened to-morrow by the addition of Paul Vandy, a clever juggler, who turns himself into a “human billiard table.” Vandy had a good relationship with the proprietor of the theatre and performed there repeatedly between 1922-1929.

In Magician Monthly, May 1925 under the title of Magic & Magicians the authors reviewed the evergreen Paul Vandy as follows: “We recently had the pleasure of seeing Paul Vandy's turn once again, and we are not exaggerating when we say that we enjoyed every moment of it just as much as we enjoyed it when we first saw it, and we decline to try and remember when that was! There have been changes, of course, in some of the details, but the principal item—the bright, cheery personality of the performer—happily remains the same."

In July 1927 following a performance at the Victoria Palace Theatre, London the Stage commented that “Paul Vandy is a dexterous juggler with a particularly genial style of presenting his tricks, and he secures plenty of applause for a smart act.”

Charles Edward Maynard's birth still remains a mystery. Censuses and reviews from Nottingham suggest he was born in Nottingham between 1873-1875. His father was purported to be a photographer named John Frederick Maynard.