From Magicpedia, the free online encyclopedia for magicians by magicians.
Jump to: navigation, search
The Sphinx Illusion created by Thomas Tobin was first presented by Colonel Stodare at the Egyptian Hall in October 1865 to mark his 200th performance. 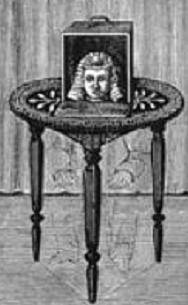 A seemingly disembodied Egyptian head was contained in a box set on an empty table. The Sphinx would open its eyes, smile, and speak in verse. It would also give replies to questions. Stodare would concluded by closing the box and reopening it to discover a pile of dust where the head had been.

The method for this effect is often called the Sphinx Principle.