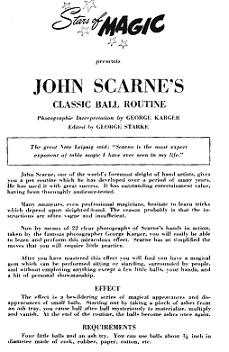 The Stars of Magic series was originally released by Stars of Magic, Inc. in the 1940s and 1950s as separate manuscripts from some of the top close-up magicians at the time. They were later bound in a hardcover edition by Louis Tannen, Inc. The rights were later purchased by D. Robbins & Co. and in September 2003 Meir Yedid acquired the rights to the original and current editions.

The series was written and edited by amateur magician and judge George Starke with photographs by George Karger (a professional photographer who regularly contributed to Life magazine and was good friends with Dai Vernon and John Scarne) and periodically released over a seven year period.

The prices originally ranged from $1 to $8 for individual pieces and up to $12 for a complete series. Series Nos. 10 and 11, the last two, sold for $10 each. They were available directly from Stars of Magic, Inc. in New York and through most magic dealers at the time.

Dai Vernon(in Revelations Video Volume 1, The Story Behind the Stars of Magic Series) mentions that his series, not Scarne's, was to be the first, but that he had to leave for a job on a cruise ship to South America which delayed work on his series. Starke and Karger did not want to wait. When they informed Dai that they wanted to start the series with Scarne, he told told them John was a great friend and that would be just fine.

By the mid or late 1950s, Max Holden's shop in New York was advertising the complete set with a customized pressure binder; bright red with gold print. At the same time, two other items appeared in the Holden catalog using the same "Stars of Magic" design and layout: "New Master Lessons" by Vernon and Slydini: Vernon's "Royal Monte" and Slydini's "The Art of Using the Lap as a Servante."

The circumstances were behind the acquisition of Stars of Magic is not known, but in 1961 the hardbound edition of "Stars of Magic" was published by Louis Tannen (See Ad in Linking Ring, Vol. 41, no. 7, September, page 3). Included were all eleven of the original series plus the "two extra lessons" which were originally sold under the New Master Lessons banner.

The photographs in many of the later printings of the book by Tannens (and later D. Robbins) were of poor quality, compared to the original series, as a result of the photographs not being properly rescreened when new negatives were made for printing.

In Cliff Green's book Professional Card Magic, he introduces Henry Christ's four ace routine by saying it was to have been one of the Stars of Magic routines.

In order to boost sales, a feature story was published in The Sphinx issue in September 1951 containing select magic from all those who had contributed at the time (and republished in Genii 2013 March:

(Original manuscript descriptions as they appeared are in italics)

The effect is a bewildering series of magical appearances and disappearances of small balls. Starting out by taking a pinch of ashes from an ash tray, you cause ball after ball mysteriously to materialize, multiply and vanish. At the end of the routine, the balls become ashes once again.

Using two ordinary decks with backs of different design, the spectator shuffles one deck while performer shuffles the other. At no time does performer tough spectator's deck. Spectator cuts his deck three times, each time exchanging a card with the performer. When both ribbon-spread their decks, a miracle is accomplished -- each time spectator and performer turn up one of the three stranger cards in their decks, the cards turn out to be alike -- a knock-out triple coincidence. Both decks are left on table for examination.

A nice advantage of this trick is that you can do several effects with one of the decks BEFORE you bring out the second.

A silver coin in the spectator's hand changes place magically with a copper coin in the hand of the performer. This is followed by a beautiful penetration effect of the coin passing through the trousers pocket. For many years magicians were under the impression that Scarne used gimmicked coins. Now, Scarne shows that he does it with ordinary coins and gives you his exact method.

It has been suggested that this is essentially Dai Vernon's.

Dai Vernon divulges one of his most astonishing discoveries, an exquisite card miracle entitled "Triumph." A revolutionary sleight is involved which will be coveted by every magician. I is an easy-to-do false shuffle equivalent to a pull-through shuffle, considered one of the most difficult of all gambling sleights. Very few magicians are able to execute a neat and deceptive pull-through because it requires years of constant practice and most of them have abandoned the effort in disgust. Now, by means of Dai Vernon's false shuffle you can achieve the same result with very little practice. You will find it the perfect false shuffle for maintaining the order of the reds and blacks. Furthermore, lovers of gambling tricks will rejoice in this sleight because the order of the entire pack can be kept intact.

This may be the first time Triumph was published.

In actual performance, Vernon did not use the now well-known “Triumph Shuffle” when he did the routine. He used a pull-through shuffle. The “Triumph Shuffle” was included in the description of the trick because of it’s extreme ease of execution, a significant selling point for the trick.

The four aces, fairly distributed throughout the deck, are cut to with uncanny accuracy in a new and impressive manner. Few magicians have as yet been privileged to view this extraordinary routine which produces one of the most entertaining impromptu effects in card magic. Dai Vernon also discloses here for the first time his own method of controlling cards during the process of cutting. This secret alone is an extremely valuable sleight for which you can find numerous uses in card conjuring.

This was simplified from Vernon's original handling because George Starke felt the handling was beyond the skill level of most magicians. See The Original Cutting the Aces By Dai Vernon in Genii 1965 January, Vol. 29, No. 5.

Dai Vernon reveals a cherished routine which has been one of his pet mysteries for many years. The effect involves a series of remarkable and inexplicable changes of two coins of the same size but minted from different metals, such as a half dollar and an English penny. It utilizes a very old sleight originally employed by English swindlers at county fairs and carnivals. Until now this routine has been guarded, and consequently it is practically unknown to the magic fraternity. Although the effect appears extremely difficult to perform, its simplicity will intrigue you.

Inspired by a routine of Edward Victor’s which appeared in his book, Further Magic Of The Hands, called "A Further Changing Coin Effect," which itself is a version of an older changing coin routine which appeared in The Sphinx.

Vernon usually ended Spellbound by doing a coin change the was not included here because he did not want to tip it at the time. It appeared in The Gen magazine some years later.

This is Dai Vernon's original method of passing our coins, one at a time, through a table into a glass. The sleights utilized in this effect appear very natural and are easy to do. By adding superb misdirection and subtleties to natural movements, Dai Vernon has created a magnificent routine. After practicing and mastering this routine you will have an effect which will establish you as a superlative sleight-of-hand performer.

The two red aces are exhibited, one on the top and the other on the bottom of the deck. They are unmistakably inserted into the center of the pack, when "Presto!" they appear on the top and bottom respectively. This action is repeated, and on the third change they become black aces. The black aces, too, are inserted in the center, only to return to the top and bottom. Then one red ace changes to a black ace and one black ace changes to a red ace, and finally all four aces are produced for a startling climax.

The magician relates an incident where he has apparently been shortchanged but in the end came out ahead of the game.

Four sugar cubes, dice or dominos are laid out on a table in a 15" square. The magician places each hand on a cube. The fingers are wiggled and the hands are removed. After repeating this action several times it is found that the four cubes, one at a time, have traveled mysteriously to one spot. This routine leads into an amusing finish wherein the performer shows that cubes placed in his pocket somehow find their way back into his hand.

This series was edited by Dr. Jacob Daley and George Starke

Series 8, No. 2: Slydini's Flight Of The Paper Balls

Leipzig's Tear-Up With A Twist