The Unmasking of Robert-Houdin

The Unmasking of Robert-Houdin was marketed as "The first authentic history of magic ever published". Houdini claims it took more then fifteen years of research.

It contains many images, clippings, and programs of well known magicians, documenting an interesting area of magic. In Harry Houdini's Conjurers' Monthly Magazine (May 1908) there was an announcement that before "The Unmasking of Robert-Houdin'" was published, the price was announced as $2.00. When the book was ready to market, the price was reduced to $1.00 by Houdini, who would pocket the loss in order to get the book out to more people.

The book was an unflattering account of Harry Houdini's legendary predecessor Robert-Houdin, written in part because his widow would not agree to meet him. Houdini tries to show that most of the tricks that Robert-Houdin claimed as his invention were in fact not.

Many magicians took exception at the time with Houdini and most the allegations, however, did not stand close inspection over time. Magician have published responses to this book including: 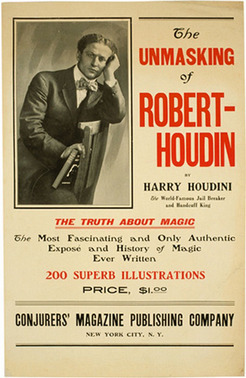