From Magicpedia, the free online encyclopedia for magicians by magicians.
(Redirected from Vernon)
Jump to: navigation, search

Dai Vernon (1894–1992) was a Canadian magician who's expert sleight-of-hand technique and extensive knowledge garnered him universal respect among fellow magicians and the nickname of The Professor. His influence was considerable in the magic world with his generous mentoring to a number of famous magicians. He lived out his last years at the Magic Castle.

Due to his extraordinary skill at sleight of hand, Dai Vernon is affectionately called The Professor. Harry Houdini (who in his early years billed himself as "The King of Kards") often boasted that if he saw a card trick performed three times in a row he would be able to figure it out. Vernon then showed Houdini a trick, where he removed the top card of the deck and placed it in the middle, and then turned over the top card to again reveal the original card. Houdini watched Vernon do the trick seven times, each time insisting that Vernon "do it again". Finally Houdini's wife, and Vernon's friends said, "Face it Houdini, you're fooled." For years afterward, Vernon used the title "The Man Who Fooled Houdini" in his advertisements. Vernon first fell in love with magic when he was eight years old after his father took him to see a magic show. The first real magic book he ever owned was an early edition of perhaps the most famous card book of them all, "Expert at the Card Table", by S. W. Erdnase. By the time he was 13 he had completely memorized the contents of the book. He also had a famous encounter with another up-and-coming young magician from his town who asked Vernon, "What kind of magic do you do?" Vernon responded by asking the boy to name a card. Upon pulling a pack of cards from his pocket, Vernon turned over the top card of the deck to reveal the named card and replied to the speechless boy, "That's the kind of magic I do. What kind of magic do you do?" 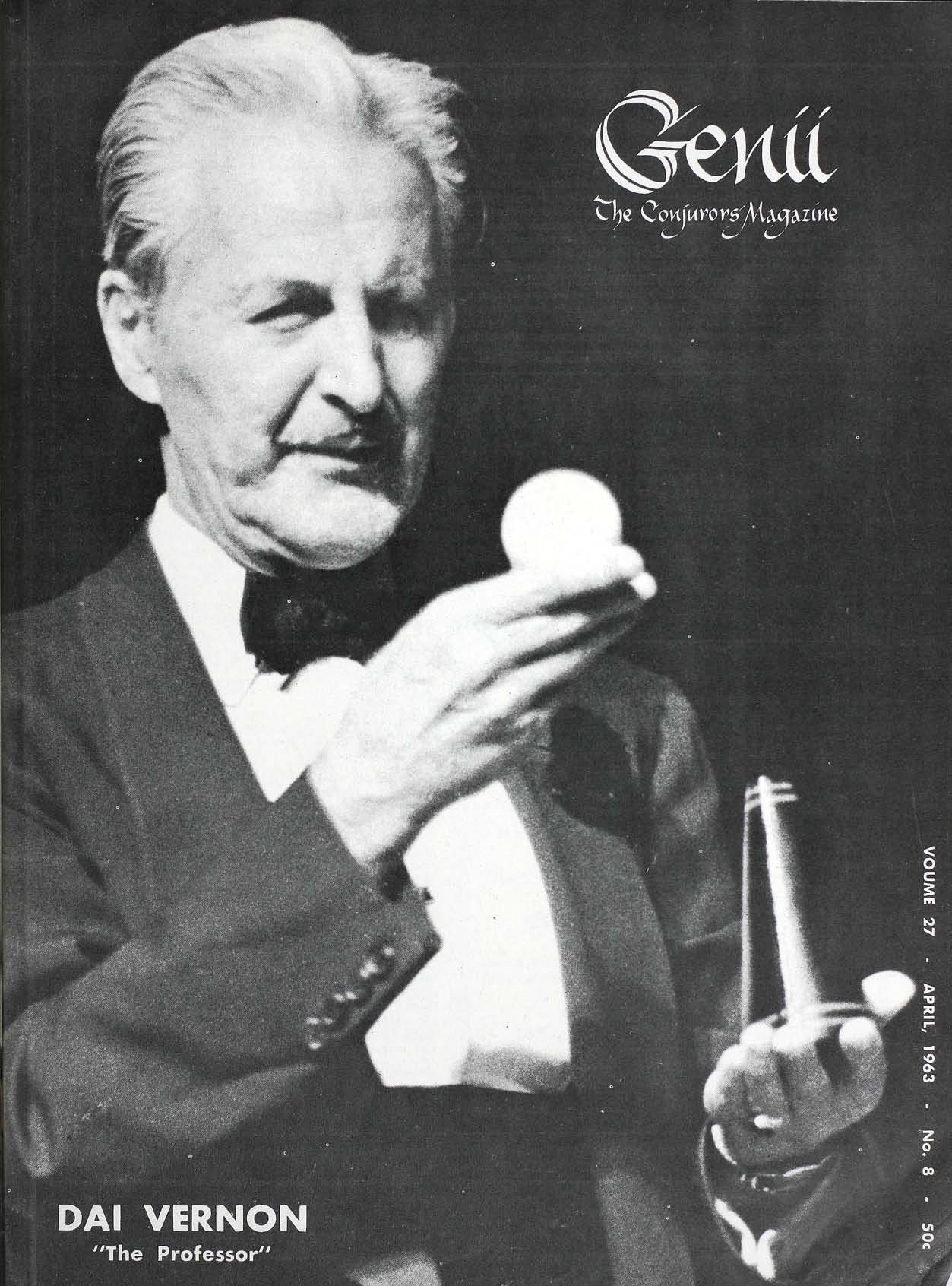 Vernon made his home in the magic circle in New York, which was basically the back of an old magic shop, and had perhaps the best and most famous card magicians in the world at the time as its residents. It was here that the extremely famous incident involving Walter Scott occurred. In 1930, Walter Scott, then an unknown card hustler, was brought in to do a demonstration. After Scott was blindfolded, one of the men watching shuffled and cut a pack of cards and handed it to Scott. The blindfolded man proceeded to deal out six hands of five-card draw poker, and in his hand were four aces and a king. None of the magicians present saw how it had been done, earning Scott the nickname "The Phantom of the Card table", and many believed that his skills rivaled that of Dai Vernon. However the only magician not present that night was Dai Vernon. More information on this and other magicians can be found in The Phantoms of the Card Table by David Britland.

Dai Vernon spent most of his life traveling all over the United States of America looking for card cheats and anyone who might know anything about sleight of hand with cards. He was famously under-credited for much of the work published in Jean Hugard and Frederick Braue's Expert Card Technique, though a later edition included an extra chapter which acknowledges Dai Vernon's contributions. In fact, a huge portion of the sleight of hand had been discovered by Vernon over years of searching.

Vernon was perhaps the most skillful sleight of hand artist that ever lived and, with Ed Marlo, possibly the most influential card magician of the 20th century. Among magicians, he is credited with inventing or improving many standard close-up effects with cards, coins, and other small items. The "standard" Cups and balls routine is his, and his 6-ring "Symphony of the Rings" remains one of the most popular Chinese linking rings routines in use to this day.

Vernon spent the last thirty years of his life as Magician-in-Residence at The Magic Castle in Los Angeles, California. There he mentored numerous well-known magicians including Ricky Jay, Persi Diaconis, Doug Henning, Bruce Cervon, Larry Jennings, Chuck Fayne, Max Maven, Michael Ammar and John Carney. All mentioned have become some of the best close up magicians in the world.