From Magicpedia, the free online encyclopedia for magicians by magicians.
Jump to: navigation, search
Aberdeen Magical Society is a Scottish magic organization which was founded on December 17, 1926 with fifteen members and celebrated its 85th Anniversary in 2011.[1] 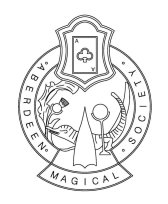 They held their first public show in March 1928 and they were affiliated to The Magic Circle from 1931 to 1944.

In 1936 the Society organized the first magical conference to be held in Scotland.

The Society joined the Scottish Association of Magical Societies in 1952.[2]