Ariel Frailich (b. 1956, Canada), moved to Belgium where he became intrigued with magic after picking up a Clayton Rawson booklet that was translated into Dutch.

In 1973, on one of his frequent excursions to Klingsor’s magic shop in Brussels, he met an American magician he had never heard of—Frank Garcia—who proceeded to show him card tricks that transformed his view of the art. One year later, at the age of 18, he moved to Toronto, and eventually became a regular at the Saturday Round Table, a group of high-level close-up enthusiasts that included Derek Dingle, Elizabeth Warlock, Norman Houghton, Tom Ransom, Reg Holden, Mike O’Dowd and David Drake.

Before long, Frailich earned a reputation for, among other things, having a world-class invisible pass, and at the 1979 Fechter's Finger Flicking Frolic convention, Howard Schwarzman asked him to perform it for Eddie Fechter, who, after watching it, said “I can name about five people who can do that, and then I have to think.” 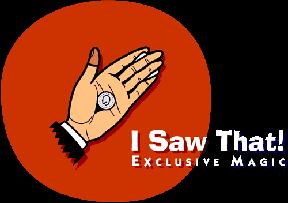 In his interview with David Acer in the April, 2002 issue of Genii, Frailich described what happened next: “I came back to Toronto after Fechter’s, came down from the high, and realized that nothing had changed. I was still a magician’s magician, no less boring than before, and perhaps even a little more boring. It didn’t change me. I still had my shyness, my insecurities, so obviously it wasn’t the answer. At that time, I got married, I was starting a career, and my recent experiences with magic were actually more disheartening than encouraging, in spite of the door opening, so by 1981, I had gotten out of magic entirely.”

In 1995, after reinventing himself, Frailich rediscovered magic and wrote Card Stories, a collection of original card routines with the emphasis on presentation. Its success spurred Frailich to produce more books under the I Saw That! bannerhead, including Norman Houghton’s Wit & Wizardry, Cushing Strout’s On the Other Side of the Mirror, and the benchmark Uwe Shenk/Michael Sondermeyer book, Performing Magic for Children. 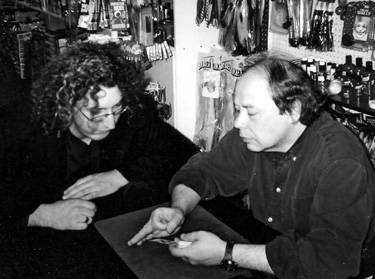 Ariel Frailich lures David Acer in with a card trick... 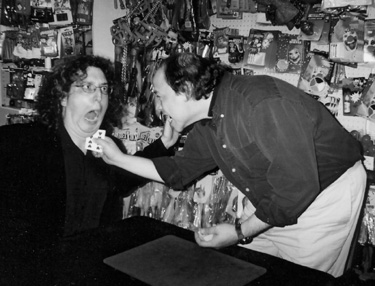 ...then lunges for the kill!
“In the Spring of `96, a little hardcover book called Card Stories was released by a little hardcover man named Ariel Frailich. The book quietly sold out of its modest first printing of 250 copies, largely as a result of glowing word of mouth, but more importantly, it marked the beginning of a publishing enterprise that would go on to produce not just good work, but important work... What few people know, however, is how it is that a man who was renowned for his expert card technique suddenly became famous for engaging story-telling. In this interview, we take a walk though thirty years in magic, from the early seventies at Klingsor’s popular shop in Brussels, to the early eighties at Browser’s Den in Toronto, to the early nineties, when one of card magic’s finest underground practitioners suddenly experienced a profound and life-altering artistic epiphany.”