From Magicpedia, the free online encyclopedia for magicians by magicians.
Jump to: navigation, search
The Davenport Brothers were the American magicians Ira Erastus Davenport (1839-1911) and William Henry Harrison Davenport (1841-1877) who performed in the late 1800s. Sons of a Buffalo, New York policeman, Ira Davenport, Sr, and Virtue Honeysett[1], the brothers are famous for deceptively presenting illusions that were claimed to be of a supernatural origin. 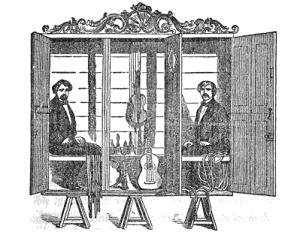 The Davenports began performing in 1854, less than a decade after the Spiritualism movement had taken off in America. After stories of the Fox sisters began to receive public attention, the Davenports started reporting similar occurrences happening to them. Their father resigned from his police job and took up managing his sons and the group was joined by William Fay, a Buffalo resident with an interest in conjuring. Their shows were introduced by a former "Restoration Movement" minister, Dr. J. B. Ferguson, a longtime follower of Spiritualism, who falsely assured the audience that the brothers worked exclusively by spirit power rather than the deceptive trickery of commercial magicians. Ferguson was apparently sincere in his belief that the Davenports were possessed of real spiritual powers.

The Davenports' most famous effect was their box illusion. The brothers were tied up and closed inside a large box which contained a number of musical instruments. Once the box was closed, the instruments would be made to sound. Upon opening the box, the brothers were found tied in the same positions in which they had started the illusion. Those who witnessed the effect were made to believe that supernatural forces had caused the trick to work.

The Davenports toured the United States for 10 years and then traveled to England where spiritualism was beginning to become popular. In 1868 the team was joined by Harry Kellar. Kellar and Fay eventually would leave the group to pursue their own career together as a magician team.

A number of famous magicians including John Henry Anderson and Jean Eugène Robert-Houdin worked to expose the frauds of the Davenport Brothers, both by writing exposés and performing duplicate effects in their own acts. A pair of amateur magicians followed the brothers' act around Britain, tying the Davenports into their box with a knot that could not be easily removed and thus ruined and exposed the trick to angry audiences who then demanded their money back. The impresario P. T. Barnum also included an exposé of the Davenports in his 1865 book The Humbugs of the World.

The Davenports were rejoined by William Fay for a final American tour before William Henry's death in 1877.

After a period if illness (Tuberculosis of the lungs) William Henry Harrison Davenport died at the age of thirty-six on July 1, 1877, at the Oxford Hotel in King Street, Sydney.

Ira Erastus returned to the U.S. on October 20, 1877. A brief attempt, by William Fay and Ira Davenport, at reviving the show in 1895 was a dismal failure.

William Fay settled in Australia to run a general store. Eventually he retired to Kew, Victoria, and became an Australian citizen in 1915 before his death in 1921

Before his death in 1911, Ira Erastus was interviewed by escape artist Harry Houdini, a noted skeptic of Spiritualism. Ira told Houdini that he and his brother had never actually confirmed belief in Spiritualism to their audiences and that the announcements made by Dr. Ferguson were simply part of the act. Houdini thought it was important to make it clear to his audiences that all of his escapes were accomplished by feats of skill alone, not supernatural abilities, and that similar performances by others were likewise, regardless of any claims to the contrary.