Flight of the Paper Balls

From Magicpedia, the free online encyclopedia for magicians by magicians.
Jump to: navigation, search
Flight of the Paper Balls (or Paper Balls Over Head) is an effect where successive balls of paper disappear before the volunteer's eyes while the audience sees the magician actually tossing them over the volunteer's head. 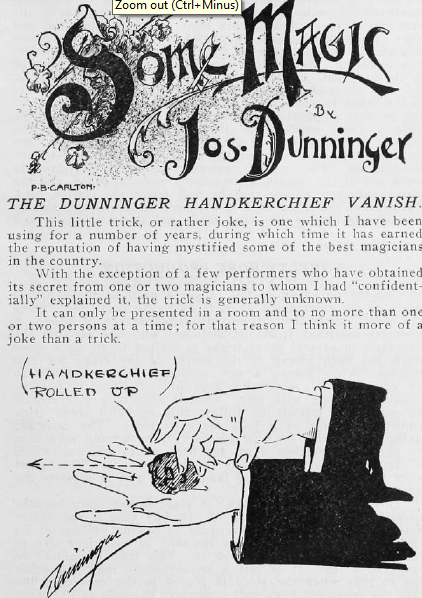 Sphinx (September 1914)
It was later adapted to large paper balls by Tony Slydini and performed in night clubs by 1949.

Dunninger was fooling some of the best magicians in the country using a balled-up handkerchiefs starting around 1912. He published, what he called a gag as "The Dunninger Handkerchief Vanish" in The Sphinx (September 1914). In "Dunninger's Complete Encyclopedia of Magic," he includes the effect and gives credit for the performance he saw of Harry Kellar. In Goldston's "Magazine of Magic" (Oct. 1914 p.29) under the 'A Subtle Vanish for a Handker-chief' by Horace Goldin, he notes: "The inventor of this trick, a famous Chicago Magician, took into account the fact that a man cannot turn his eyes upwards unless he raised his head."[1]

In Lewis Ganson's book, "Magic With Faucett Ross ," the following appears on page 153:

"For years, magicians have been Vanishing paper balls, Rolled up hankies, etc, by tossing them over the heads of unsuspecting stooges. The procedure gets a laugh from the audience but, of course only fools the stooge himself. Nevertheless it is a cute piece of business, and real comedy if well handled. No one performs the effect better than Tony Slydini of New York, who several years ago, contributed his version to the stars of magic series."

Harry Blackstone Sr. developed it was a stunt in which a silk or spectator's watch was tossed over his head to an assistant behind. George Johnstone built this into a more substantial piece in his show. He showed this to Slydini, who went on to develop his Paper Balls Over Head routine.[2]