From Magicpedia, the free online encyclopedia for magicians by magicians.
Jump to: navigation, search
The Gold Fish Trick, also known as Aerial Fishing, was created by Walter Mingus Hopler (known on stage as Professor Mingus) in 1893. He performed in Vaudeville in New Jersey and New York. 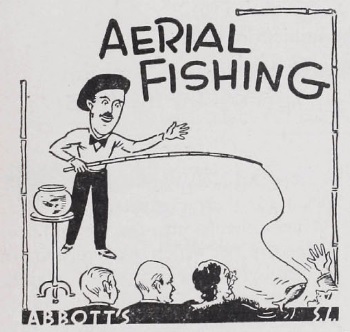 A fishing pole with a hook and bait was used to cast out over the audience, where a goldfish would appear to be caught in the air, and then be swung back to the performer dangling from the hook. It would then be taken off the hook by the performer and released into a goldfish bowl filled with water, where it would swim around (it actually was a real goldfish, at this point in the trick, swimming around in the bowl).

After Professor Mingus retired, William Robinson (Chung Ling Soo) was one of the first to try to get the secret of the Gold Fish effect to use in his new Oriental act.

John Booth, Cecil Lyle, Alan Shaxon, and Mac King have all been known to perform the effect.