Professor Velle (1837-1889), known for wearing a black velvet jacket while performing, used only a few props in his act underscoring his skill as a sleight-of-hand artist. He traveled throughout Europe, enjoying success in Germany, Russia, England, Italy, France, and Spain.[1]

Joseph Velle was born in 1837, in Pest, the capital of Hungary, to a merchant-trader and amateur magician. Velle displayed talent as a magician at an early age and after his parents died at the age of twelve, he supported his younger brothers and sisters performing as traveling magician. He would earn some fame in and around Pest. His act gradually took him further out into the countryside, where people would often pay him food, which he would often sell to support his siblings.

He served for a short time in the military. When asked by an army major to perform magic, he borrow 12 talers (silver coins) and made them disappear. The major was so astonished that he let Velle keep them. Upon leaving the army, he traveled throughout Europe performing for nobility and was awarded a variety of merits and orders. 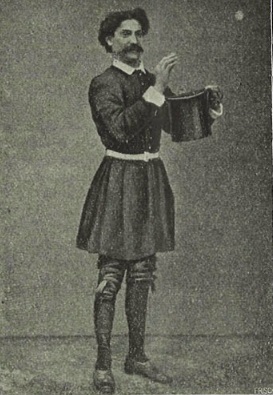 In 1867, he met Compars Herrmann in Milan. At first, the rival magicians detested each other because Velle would perform all of Herrmann's tricks the day after Herrmann's performance. This enraged Hermann, but the two soon found that they could be more successful making money if they performed as a single act. They joined forces, splitting costs and profits equally.

Velle invented a trick hat that permitted him to work surrounded while performing in a circus ring. He is probably the "Hungarian conjuror named Well" which Robert-Houdin reported in 1868 as having mastered the Boomerang Card (thus possibly the inventor of that too).[2]

Velle, who eventually learned to speak eleven languages, died at the age of 52 in 1889, in Perugia, Italy, where he was also buried.