Magician Ken Brooke (1920-1983) was a magic dealer, a skilled demonstrator and a magical consultant.

Although his public recognition was not great, Ken Brooke had a profound influence on the greats of the UK magic scene, the likes of David Nixon, Tommy Cooper, Paul Daniels, David Berglas, Geoffrey Durham, and Wayne Dobson. 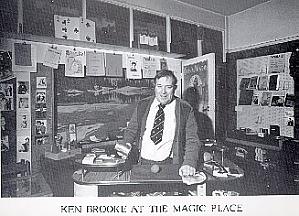 British magician and magic dealer does not do him justice. Ken Brooke wasn't just another magic dealer. When he sold someone an effect, many times it included his own instructions sheets, which reflected the real experiences of a performer who not only cared about how the tricks should be performed, but who also cared enough to provide information on the proper performance to those who bought his products.

Even for those who do not do particular effects that were sold by Ken Brooke, reading these instructions sheets provided real lessons in magic.

Invented a version of "Chase the Ace" (1955), "Fido" (a card trick) and may have invented "Professor Cheer's Comedy Rope" (at least he was the first magician on record who performed the trick at Glasgow, Scotland).

Brooke was cremated at Golders Green Crematorium in London. A memorial service was held for him at St Paul’s Church, Covent Garden. Readings were given by Paul Daniels and John Fisher. The service was conducted by Roger Crosthwaite.