From Magicpedia, the free online encyclopedia for magicians by magicians.
Jump to: navigation, search
Soft Soap is a routine created by Dr. Howard B. Kayton in which dirty handkerchiefs placed in a cardboard soap box come out clean. The box is torn up and shown empty. 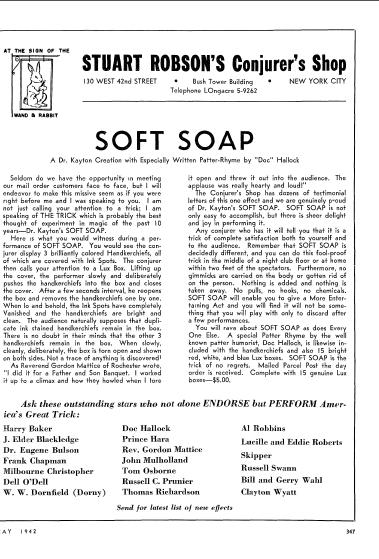 Marketed in 1941 by Stuart Robson, it won the award for best "sucker type" effect in Genii magazine for the next year.[1] .

Featured by Russell Swann, John Mulholland, Milbourne Christopher and many other magicians in the 1940s, it was still very popular in 1949 as seen in the Genii-Orben Poll