From Magicpedia, the free online encyclopedia for magicians by magicians.
Jump to: navigation, search
The Sphinx Award began in 1933, awarded by The Directors of The Sphinx for the best published effect in the magazine during that year. 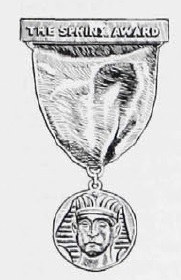 Two silver medals were awarded, one for professional magicians and one for amateurs.[1]

They were awarded annually until the magazine ended in 1953.