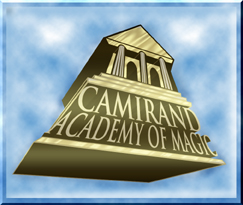 The Camirand Academy of Magic is a Canadian publishing house that was co-founded in 1978 by magicians Guy Camirand and Gary Ouellet. A Harvard Business School graduate, Mr. Camirand wanted to produce books and tricks that covered "the background, where the trick came from, why it was done this way, and also introduce, if not completely new moves or methods, at least new twists that were well taught and natural. Also, it had to be something that would entertain lay public, but the structure and method had to be good enough to fool magicians." [from "Wise Guy: An Interview with Guy Camirand," The CAM Flash (a precursor to Northern Peaks), May 2001]

With this as their company mandate, the Academy went on to publish seven lavishly photo-illustrated one-trick booklets by Gary Ouellet between 1979 and 1986—Finger on the Card, Supershells, The Silver Passage, The Two Goblets, Threshold, The Homing Ring, and Eric DeCamps’ The Coin Connection—which collectively form the Masters of Magic series.

The success of these booklets (both critical and commercial) prompted Mr. Camirand to expand the Academy from its base as a publisher into manufacturing, and, in the early 1980s, he began producing tricks with gimmicks that reflected the company's ideology. Tony Binarelli's Lips, Paul Bélanger's The Bélanger Cigarette Thru Quarter, and Guy Camirand's own The Automatic Coffee Stirrer were among the first of these, all of which continue to be popular dealer items.

The Masters of Magic Series

Other Books by The Camirand Academy

Lecture DVDs by The Camirand Academy

Tricks by The Camirand Academy